Apparently the coronavirus pandemic is giving former boxing legends the impetus to consider coming out of retirement. Following Mike Tyson’s workout footage appearing on social media, one of his biggest rivals is challenging him to a fight.

Over two decades later, the “Real Deal” wants to finalize the trilogy.

In his footage, Holyfield shows the hand speed and skills that made him one of boxing’s biggest draws in the 90s. He looks lean and in shape. 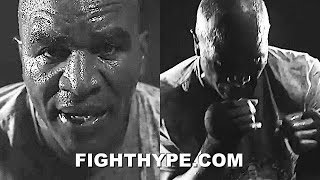 But does that mean he should fight a 53-year old Tyson? And is this something we actually want to pay to see?

Despite the four years of age between them, the optics make it seem like the difference is greater. His son Elijah is currently on the Philadelphia Eagles’ roster. Usually, that’s a sign an athlete is beyond prime years.

If it happens (and that’s a big if), there will be one element that this fight will have that modern heavyweight boxing is honestly missing: the sizzle. Holyfield and Tyson are very entertaining to watch in the ring separately.

The first fight went 11 rounds before Holyfield won by TKO. Even if they agree to fight eight rounds or less, there will be an excitement to the bout that not even current world champ Tyson Fury can match.

If Tyson takes this fight, it will likely be a lead-up to his entry into bare-knuckle fighting. Likely, he won’t leave himself too vulnerable before such a tremendous payday.

Even if they wear headgear and shuffle around the ring slower, there’s still the possibility of those big punches landing and exciting the crowds as they have decades earlier. That alone has piqued our attention and will keep us on alert.